It’s a Japanese language learning app that aims to be the best way for non-native Japanese speakers to read Japanese.

Getting to know the users

I conducted 5 user interviews with people who live and work in Japan to better understand their experience trying to get better at reading Japanese. None of them were native Japanese speakers.

They shared about their experiences using Japanese language learning apps and I was able to learn some of their biggest pain points.

I came away from the user interviews with 4 big insights. The product should:

A brief look at competitors

My competitor research revealed a gap in the market. None of the apps I evaluated solved all 4 pain points. I saw this as an opportunity to design a mobile app that meets users needs more effectively.

Mapping out user flows at a high level

I used a whiteboard to brainstorm a detailed sitemap to understand how users will flow through the app.

Bird's eye view of the app

I selected the sitemap screens most relevant to the 4 user pain points I identified and sketched out some rough wireframes for them. I used the crazy-8s method to generate several options for each page. 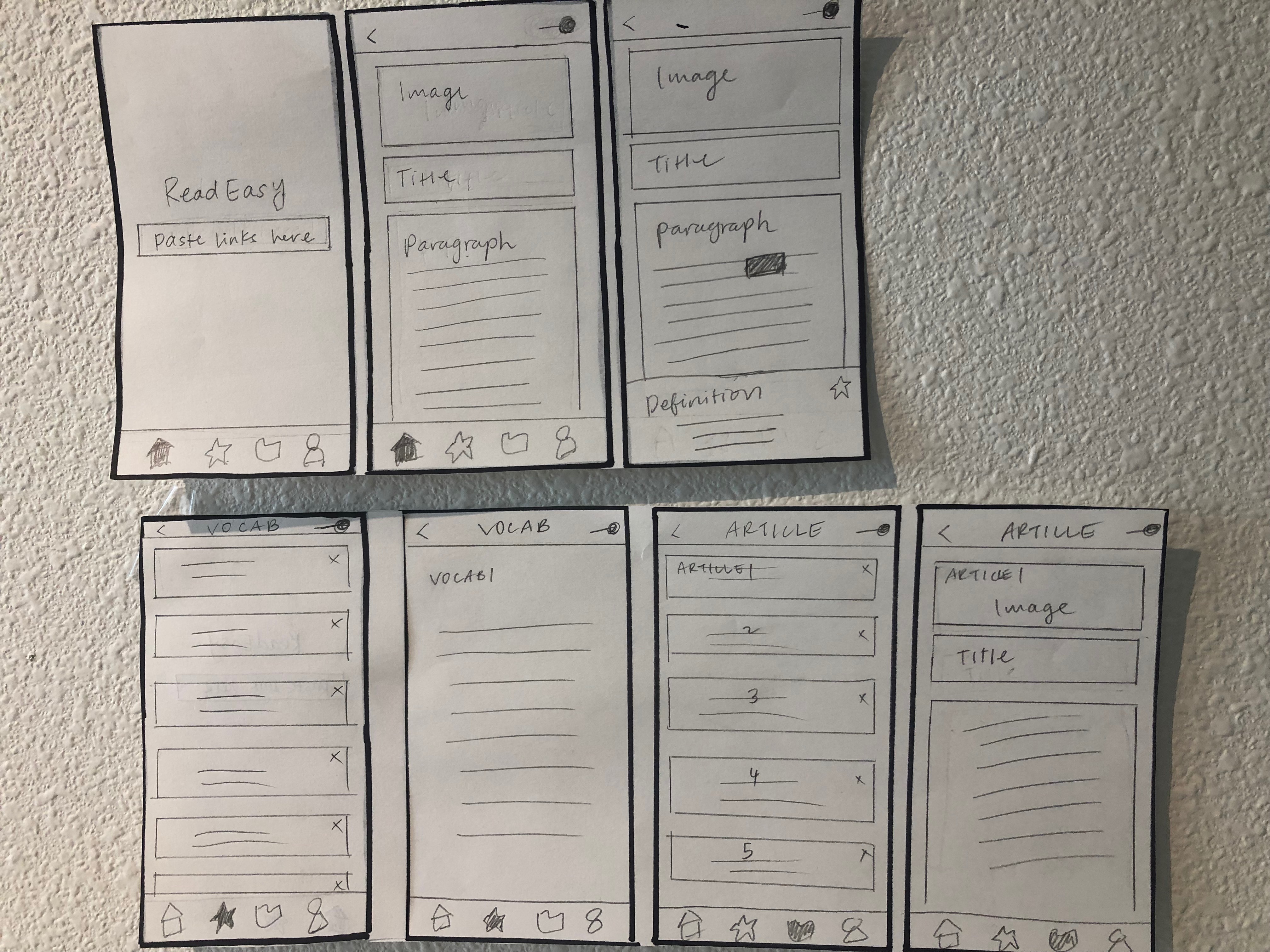 My first iteration of the article reader screen had the hint toggle button in the top right corner. When users tap this button, hints will appear above the kanji.

When I conducted usability tests, it became clear there was a problem with this button. It was placed way too high on the screen. Users had trouble reaching the button with their thumbs. This design flaw was made worse because users frequently need to tap this button. While I was doing usability tests, I observed users stretching their thumb to reach the button multiple times per article.

After some research, I found a thumb reachability map that confirmed this problem and helped me decide on the best solution. 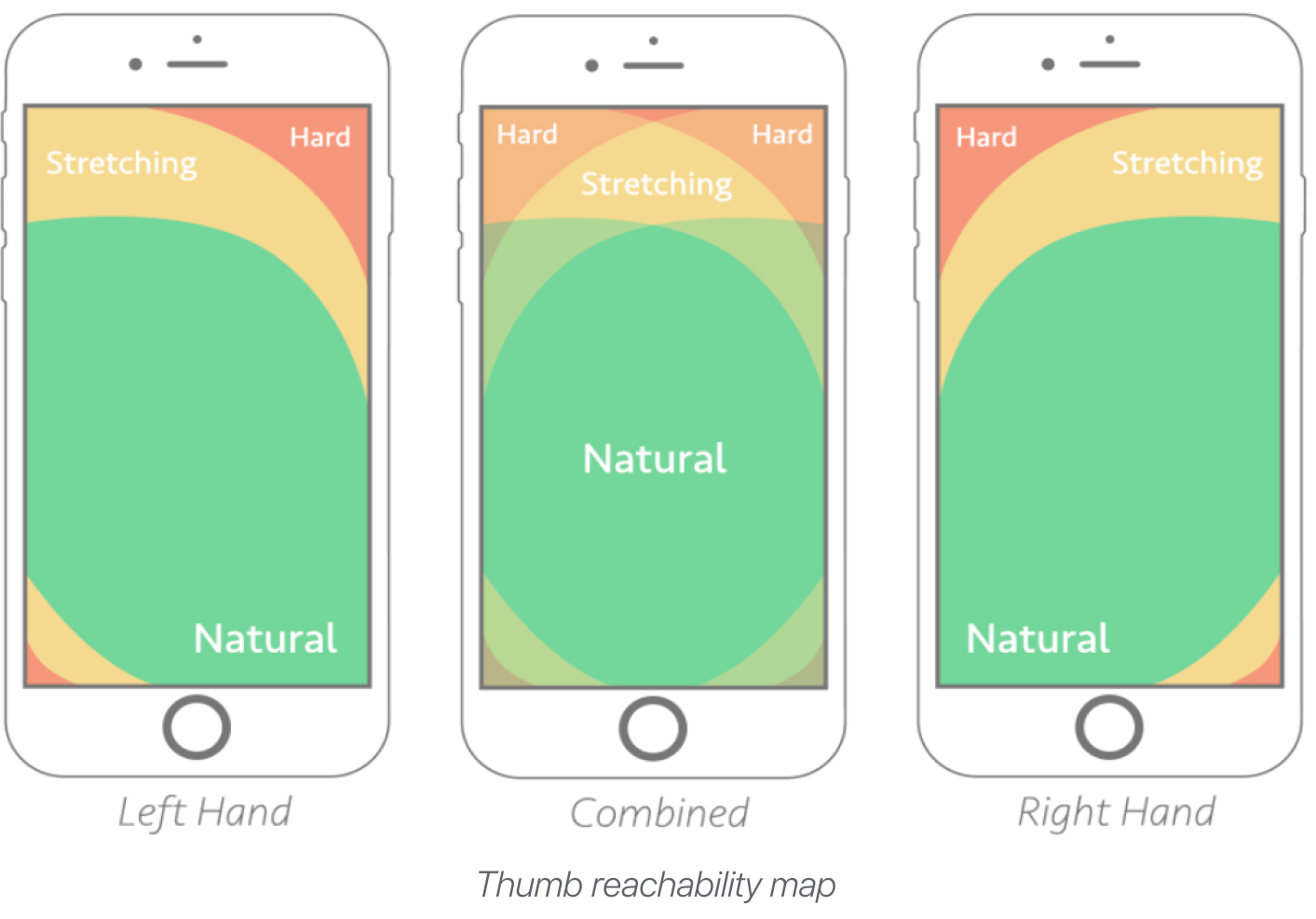 To solve this problem, I decided to put a floating hint toggle button in the bottom right. That way, users can tap it without stretching their thumbs.

This design decision increases the accessibility of the app, especially for users with shorter than average thumbs and large phone screens.

Experimenting with swipe up interactions

I added an interaction that allows users to tap on any word in an article and then the definition box will pop up at the bottom of the screen.

One of the insights I got during user interviews was that users want to see more than just the simple definition. They want to see the word used in example sentences to help them remember it better.

I tried making the initial definition box popup big enough to contain example sentences. That didn’t work out because example sentences require a lot more space than simple word definitions. The popup box was taking up more than half of the phone screen for most words.

To solve this problem, I created an swipe up interaction on the initial definition box that causes the box to expand and show example sentences.

Other design wins from usablity tests

The table below shows additional examples of how I incorporated user feedback into my design.

What are the next steps for ReadEasy?

Here are the final designs!

Just tap the hint toggle button and users can easily see hints for each kanji. Tap any word and its definition will pop up.

The vocab or articles that you bookmark will be listed by category. Users can easily go back and find the ones they are looking for.

Back to work
Next